No Matter the Fence Shape, We Cover all the Angles

It would be very easy if every piece of land were a simple rectangle, but the world is not that simple. The good news is that you can install aluminum fencing panels in almost any conceivable shape. Some flexible fence mounts can help accomplish nearly any job. 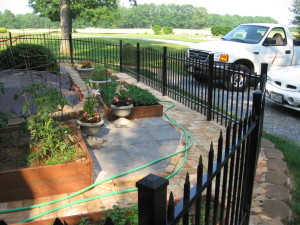 Swivel Mounts to the Rescue

Horizontal swivel mounts make it easy to install aluminum fence panels at almost any angle. These are made from cast aluminum alloy. They won’t rust, and you can buy them in the same color as your fence panels. When used alone or in combination, horizontal swivel mounts and regular straight mounts can make just about any turn that’s not a right angle. You can mount swivel mounts to any surface, such as a structure or column, and you can mount them to our blank posts and end posts. That last part is important; you will not be mounting your swivel mounts to pre-punched posts, so order accordingly.

We include a couple of stainless-steel Tek screws to attach a swivel mount to a blank post. You’ll need to go elsewhere and buy longer anchor screws if you’re attaching the mount to some other surface. If possible, wait for your order to arrive to determine what is best.

You can make slight turns of less than 10 degrees using standard mounts, in which case you can get pre-punched posts.

You should choose normal, pre-punched posts and straight mounts for angles that are smaller than 10 degrees. Just insert the horizontal rails of the aluminum fencing panels in the holes in the post. Turn panels as needed to accomplish the angle, and then set the panel-to-post connection with the self-tapping screws that come with your order.

Note that you cannot use end posts for angles. These are pre-punched near the top, and you won’t be able to align the post properly with the fence panel.

Next Article:
Secure Your Driveway with a Residential Double-Swing Gate