An In-Depth Look at the Finial 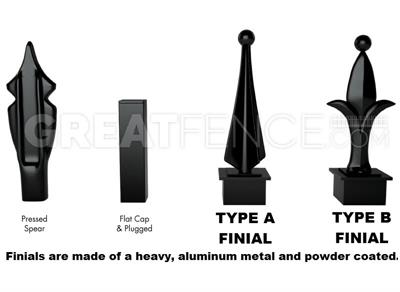 The Ongoing History of the Finial

Broadly speaking, a finial is an ornamental fixture that can cap off various structures, including fences. You can even spot them on flagpoles and curtain rods.

The finial has come and gone many times over its long history. It first appeared prominently around 711 A.D. as part of the Asian structure known as a pagoda. This is a building with an odd number of floors that is built around a staircase. You will find a central finial at the very top of the building and smaller finials decorating the eaves. Finials evolved to take various forms consonant with the Buddhist religion. They also served as lightning rods. Finials were common in Renaissance and Gothic architecture, where they were used to provide weight to maintain the alignment of buttresses.

Finials appeared on American furniture during the Queen Anne period in the early 1700s, at which time they frequently took the shapes of urns and flames. They were usually found on taller pieces of furniture, such as bookcases, bedposts and clocks. These were commonly made from wood, although more precious materials such as ivory and brass were also found. They fell out of fashion around the beginning of the 19th century. Finials are becoming more popular again on items such as curtain rods and lamps. They come in a multitude of styles and are often found on lamps, where they have the function of securing the lampshade to the base.

Pineapples have long been depicted in finials. The fruit was only served on special occasions in colonial times. Bedposts were often topped with pineapple shapes as a symbol of hospitality. Pineapples were also associated with seafarers, as captains were known to spear pineapples on porch railings.

The fleur-de-lis, or flower of the lily, was a symbol of French royalty, starting with its inclusion on the shield of Louis VII. Kings of England also used the fleur-de-lis. With its three petals, the fleur-de-lis is also associated with the Holy Trinity of the Catholic Church.

Finials for Your Aluminum Fence

Finials add an attractive touch to aluminum fences and gates. Their dimensions vary by the type of fencing in question. Residential finials measure 5/8” on each side, while commercial finials are ¾” square and industrial finials are 1” on each side. Their heights vary between 4-1/4” and 4-3/8”. You can include finials on fence styles 1, 2, 3, 5, 6 and 8. Finials for aluminum fences are made from heavy aluminum. They are powder-coated for a long-lasting finish.

A pressed spear finial resembles an arrowhead with indentations on each side. With its pointed tip, this finial adds a layer of security against fence hoppers. The type A finial is narrow and pointed with a round top. Type B finials have a fleur-de-lis shape, and a flat cap finial bears a simple rectangular shape with a more contemporary look.

Next Article:
Installing an Aluminum Pool Fence During Cold Months